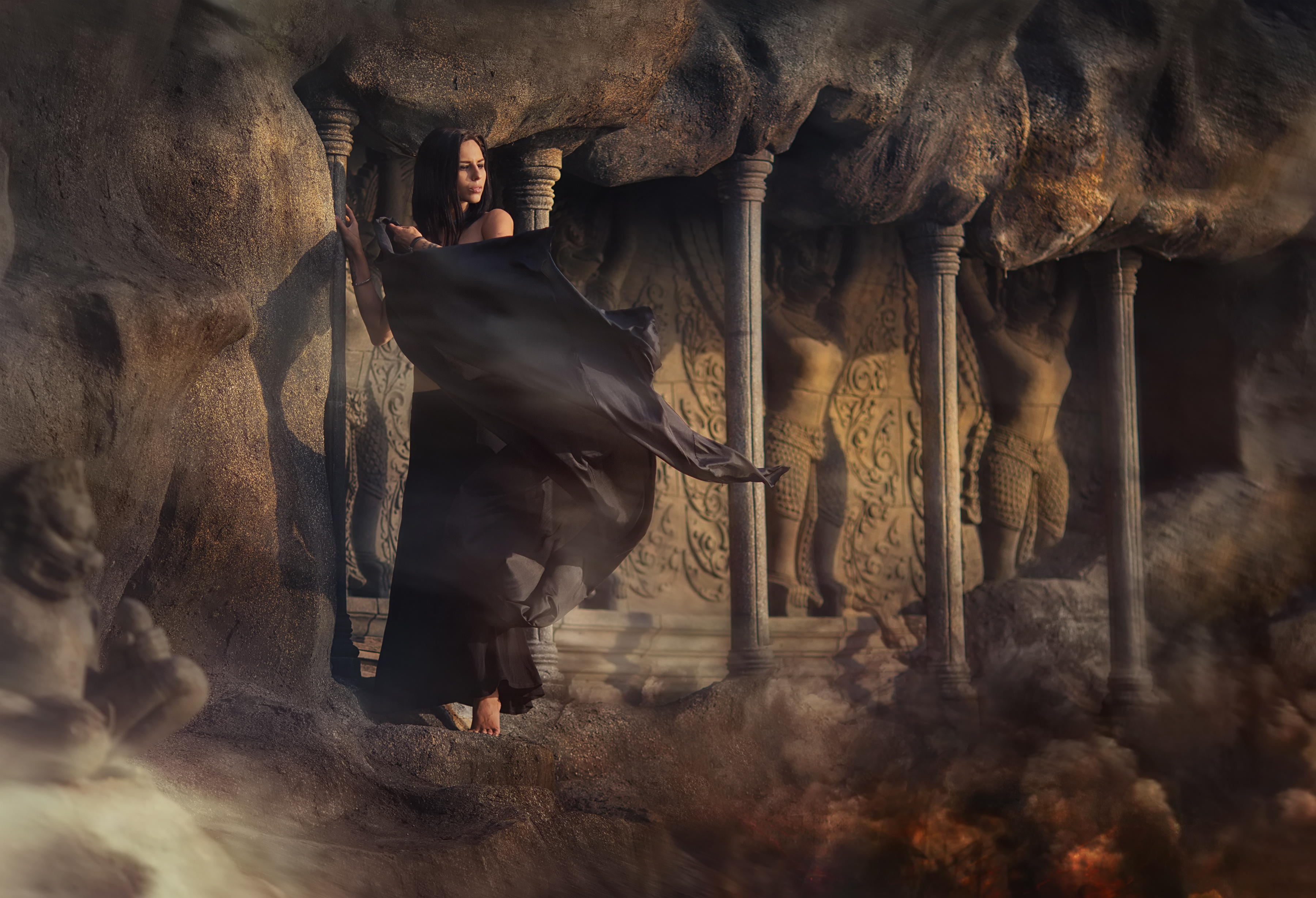 Storytime: Inanna's Descent into the Underworld

A tale of sibling love and betrayal...

The first time this story was ever told, it was written in poetry, on terracotta tablets, thousands of years ago. Its timeless wisdom and unending heartbreak have thrived over centuries of retellings.

And today, we tell this tale once more…

Our story begins with Inanna, one of the most popular Mesopotamian deities. She was the Goddess of love, sex, fertility, and war—embodying all aspects of life. Now, Inanna also had a sister, Ereshkigal, who was Goddess of the dead and the Underworld. And together, the two sisters embodied a great polarity—with Inanna known as the "Queen of Heaven", and Ereshkigal, the "Queen of the Underworld".

Now, nothing is really known of the sisters' relationship before this pivotal moment in time, before Ereshkigal's husband, the Bull of Heaven, was slaughtered. And our poor Queen of the dead became a deeply grieving widow—whose cries were so loud they pierced through the Underworld and into the realms of Heaven.

But Inanna would not be swayed from her decision. She would dress in all her finest protective adornments, and set out to find her sister—warnings be damned.

And so, Inanna set off for the land of the dead. And upon arriving at its gates, our fair Queen met the fierce gatekeeper, Neti. He demanded to know what foolish soul was trying to enter the place that no soul could leave, and Inanna, in all her fierceness and all her love, said, "I am Inanna, Queen of Heaven. Let me in to see my sister, Ereshkigal. To be with her while they give her husband's funeral rites".

Neti, not expecting Inanna to arrive and not entirely sure of what to do, informs her that he must consult with Ereshkigal before he can let her in. So, the gatekeeper runs to his Queen's side and tells of her sister's arrival.

Now, it is said that Ereshkigal harboured a deep distaste for the ways of her sister—for reasons we can only guess, but never know for sure. Perhaps it was because Inanna was a beauty that embodied lush and thriving life—while Ereshkigal was not.  Perhaps it was because she thought her sister to be arrogant and ignorant, not knowing the true ways of death and law like her. Or maybe, it was something petty from their youth. But whatever it was, it was with these distasteful feelings in mind that Ereshkigal did allow her sister in… but on the condition that as Inanna passes each of the seven gates, she must shed one of her garments.

And so, Neti returned to the gate and allowed Inanna through—taking a garment from her for each gate she passed, so by the time she entered the Underworld, Inanna was fully naked and exposed. But Inanna would not be dismayed by this setback. Vulnerable and defenseless, our righteous Goddess continued to make her way through the Underworld and into Ereshkigal’s throne room.

But when she entered the room, she saw that she and her sister were not alone—the judges of the Underworld had all gathered to pass judgement on the living soul who had dared enter their realm of death. As each judge passed their grim judgements, all was not looking good for Inanna. But, there was still hope! Her sister was the Queen, and all judgements came down to Queen Ereshkigal for the final word.

But it was then that Ereshkigal looked at her sister—the sister she had despised for so many years, the sister she loathed down to her very bones—and set her eye of death upon her, striking Inanna dead on the throne room floor. And as a final humiliation for the Queen of Heaven, Ereshkigal picked up her sister’s corpse and hung it on meat hooks next to her throne.

And this is how it was. For three days and three nights, Ereshkigal continued to rule the Underworld with her sister's corpse hanging at her side. But what Ereshkigal didn't know, was that before Inanna began her journey into the Underworld, she instructed her faithful advisor, Ninshubur, to seek help if she did not return after three days.

And as all loyal advisors do, Ninshubur went to the highest in the lands for help.

Ninshubur ran to Enki, the God of wisdom and water, and the one who originally blessed Inanna with many of her gifts. She begged him to help save Inanna, for it had been three days and three nights and still, her Queen had not returned. And so, Enki, loving Inanna as he did, created two androgynous demons that could enter the Underworld in secret to retrieve their fair Inanna.

And the demons wasted no time—going straight to Ereshkigal's side in search of the Goddess. But when they entered the throne room, the demons saw Ereshkigal in the throws of a deep and thrashing labor, and the two sympathized with her pain. Ereshkigal, grateful that these two strangers would give her such a kindness, granted them anything they would like. Riches, lands, titles—anything could be theirs! But the demons, of course, didn’t want any of that, and asked for the corpse hanging on the wall.

It was then that Ereshkigal, distracted by the pains of her labor, realized she had been tricked. But as word was law, she allowed the two demons to take her sister's corpse and flee.

The demons, once out of sight from Ereshkigal, gave Inanna's corpse the food and water of life—reviving Inanna from the grips of death. But, just as she was warned, there was a price to pay for the living to enter the land of death. And in order for Inanna to remain alive and return to the land above, another must take her place in the land down below.

So, Inanna and the demons set out to find her replacement.

First, they came upon Ninshubur, Inanna's loyal servant, and suggest she be taken in her place. But Inanna refused. Ninshubur was deeply loyal and helped her escape.

Then, they came upon Shara, a friend and beautician, who was still deep in mourning for his beloved Inanna. Again, Inanna refused, because he rightfully mourned her passing.

And finally, they came upon Dumuzid, Inanna's lover. Who wasn’t mourning at all, and in fact, quite enjoying life without his lover around—entertaining himself on lavish luxuries and beautiful girls.

And Inanna, seeing this, flew into a rage and demanded Dumuzid to be taken to the Underworld in her place.

But, all did not end so simply for our sweet Goddess. After a while, Inanna began to feel a deep and heavy regret—struck with sorrow and guilt for her now-dead lover. And along with his sister, Geshtinanna, and his mother, Sirtur, Inanna grieved Dumuzid’s death for months. And this is how it was, three women, drowning inside their grief, all-consumed by the pain of their shared loss—until one day, a small fly approaches the ladies and tells them where Dumuzid's body can be found. The fly goes on to tell the women that by finding his body, they’ll be able to change his fate.

So, the women follow the fly and go to Dumuzid’s corpse. And it is here that Geshtinanna declares that she will do anything to bring her brother back—that she will take his place in the Underworld, that she will be killed instead. And Inanna, in all her power and all her grace, is able to take Geshtinanna’s words and change Dumuzid’s fate. She decrees that her lover will only spend half the year in the Underworld, and the other half, in Heaven with her. And his sister, Geshtinanna, will take his place in the Underworld for the time he spends in Heaven. And this, Inanna decides, is how it will go. And that, as the fates would have it, is exactly how it went.

A deal is struck, Inanna gets to hold her lover once more, and Dumuzid and his sister spend the rest of eternity in a dance between two realms.

And that, my dear reader, is the end of our story.