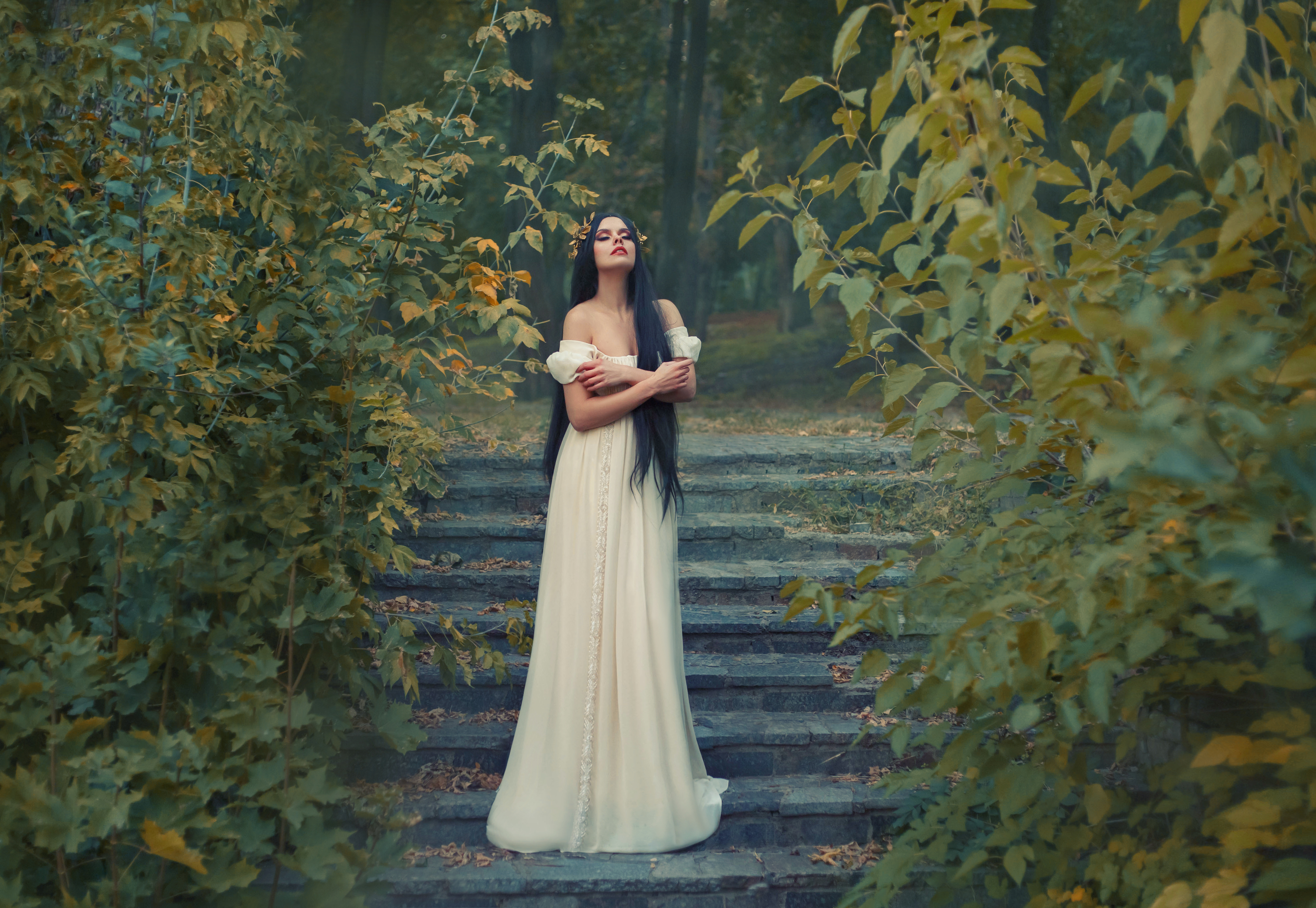 Storytime: The Myth of Psyche & Cupid

A tale of enduring love

As the original inspiration for many popular fairytales, the tale of Psyche and Cupid is one you may have never heard, and yet, still know well.

Keep reading to see what I mean…

Our story begins with Psyche, the youngest of three daughters born to a great King and Queen.

Psyche was the loveliest of all her sisters—a beauty eclipsing anything their kingdom had ever seen. In fact, her beauty was so great that Psyche became the center of many rumors and whispers throughout the lands—rumors and whispers that made their way to the ears of Venus, the Roman Goddess of beauty and love.

Now, Venus was enraged by what she had heard. How dare the mortals claim that there's a beauty greater than her! She knew this blasphemy must be stopped. So Venus, in a jealous rage, orders her son Cupid to use one of his arrows of desire to ensure Psyche falls in love with a horrid monster.

And so, as loyal sons do, Cupid flew down to Psyche's bedchambers late one night. But as he prepared the arrow, Cupid became distracted by Psyche's beauty and cut himself on the blade by mistake. This had an immediate effect on the young God—for Cupid's arrows were famed for their strong, amorous power. Even just a nick can make a soul fall in love.

And Cupid, well… Cupid was now hopelessly in love.

Life continued on in what seemed to be a normal fashion after that night. But Psyche's parents knew something was awry. For even though their youngest daughter was the most beautiful in all the lands, no mortal man asked for her hand in marriage.

Psyche's father, suspecting that his daughter's beauty may have angered the Gods, goes to Apollo's Temple to consult the wisdom of the Oracle. But what he hears, frightens him to his bones. For the Oracle tells the king that his daughter is not destined to marry any human man—but a great and monstrous beast! And she must go to him now. Psyche must go to the top of one of the tallest mountains to meet her creaturous betrothed.

Upon hearing this news, Psyche surrenders to the grimness of her fate. If I have angered the Gods by my beauty, and this is what comes of it? Then so be it.

Psyche, along with her family, dress in funeral attire and begin the march up the mountain. What should be the happiest day in her life, has become a funeral procession towards the young girl's fate. At the peak of the mountain, Psyche is met by Zephyr—the West Wind—who sweeps her off the mountain to meet her husband-to-be.

But what happens next astonishes the fated Psyche.

For the girl had let her mind wander with thoughts of a monstrous, fearsome beast—expecting to find herself in a land of great turmoil and grief. But instead, Psyche is brought to a home so grand, it was like something from a dream! With golden columns and jeweled floors, this was the most decadent place that Psyche had ever seen! How could a monster live in a place such as this?

Upon entering the doors of this home, a voice calls out to her—inviting Psyche to the dinner table for a feast. Curious and confused, Psyche sits at the table to find she’s all alone. With no guest to accompany her, our Psyche indulges in this feast set before her.

After dinner, our well-fed Psyche is brought to her bedchambers at the directions of the same disembodied voice from before. And when she enters the dark room, Psyche is met by the shadow of a man—her husband finally in the flesh! Psyche walks up to the man and asks him to light a candle so that she may meet him fully. But he denies the young Psyche, and instead tells her his one request: I will leave you in this home to live decadently and unbothered in the day. And I will come visit you at night. I only ask that you never try to look upon my face.

Psyche agrees, and her life plays out exactly as her husband had said. She would spend her days wandering the halls and enjoying the luxuries of her fine new home—and spend her nights in bed with her mysterious new man.

But despite her husband's tenderness, Psyche was still haunted by the Oracle's claims—that her man was not a man to be loved, but a monster to be feared.

So, when her sisters came to visit her not long after her marriage, these fears of Psyche’s found their reign. For Psyche's sisters, upon seeing the extravagance of her new home, fell into a deep and seething jealousy—and with that, convinced Psyche that she must ignore her husband's wishes. That she owes it to herself to the see the face of the man she's married!

So, the night after her sisters leave, Psyche waits for her husband to fall fast asleep. And with her oil lamp in hand, Psyche crawls over her husband and illuminates the room so she can finally see the creature that she married.

But what she sees instead shocks her.

For the light has shown that her husband was no monster—no creature of the night. But a beautiful man—a God—known by the name of Cupid.

In her shock, Psyche spills a drop of hot oil on the sleeping Cupid and wakes him in a rush. Cupid, upon seeing that Psyche has gazed upon his face, flees their home—distressed by his untimely revealing.

Devastated at what she has done, Psyche sets out in search of her husband—traveling for weeks, for months, before she knows what she must do.

Psyche goes to the Temple of Venus and throws herself at the Goddess’ feet—begging her for help in reuniting with her husband, Cupid.

But Venus, as we already know, felt a deep anger towards this girl, and took this opportunity to exact her revenge. She promised Psyche she would help her, but only if she completed several tasks first.

For the first task, Psyche is thrown into a barn full of grain, and told to separate each variety into heaps before dawn. Despaired, Psyche knew this task was impossible and began to resign herself to a loveless fate—until an army of ants appeared and helped her accomplish her task with time to spare.

For the second task, Psyche is instructed to cross a raging river to steel golden wool from the sheep that live on the other side. Psyche, again despaired at being set upon an impossible task, had every intention of drowning herself in this river. But when she arrived, the voice of the river reeds speaks to her, and tells her how to collect the prized wool from the shepherds.

For the third task, Psyche is ordered to fill a flask with water from the mouth of the River Styx. Again, Psyche is deeply distraught at being faced with yet another impossible task. The steep rocks around the river's edge terrify our poor sweet Psyche, until an eagle arrives who helps her collect the water.

And for her final task, the amazed but still angered Venus, orders Psyche to go to the Underworld and retrieve a bit of Queen Prosperina's beauty. For this, Psyche is given a box to collect the Queen's beauty, along with strict instructions to not open the box.

So, Psyche sets out for the Underworld to complete her fourth and final task.
And as I'm sure you can guess, the young girl succeeds in her mission—bringing a box of Queen Prosperina's beauty back to earth.

But as stories like this go, there is always another, final twist.

For Psyche, deeply curious about the box of beauty she retrieved, cannot help the temptation she feels and opens the box to take a peak inside. But what she finds isn't beauty, but a power that puts her immediately into a deep and eternal sleep.

Now, what you don't know is that all this time Cupid has been watching over our fair Psyche. He was the force behind each of her miraculous successes—the influence that kept her going.

And so, Cupid, overcome by the fate of his beloved, flies to her and lifts her body up into the heavens. He pleads with the mighty God Zeus to lift the curse and forgive Psyche's wrongs. And Zeus, taking pity on the young mortal, agrees—demanding that Venus lift the curse.

And with that, Psyche awakes from her eternal sleep.

Upon waking, Zeus gives Psyche the gift of Ambrosia—the drink of immortality—so that she and Cupid may be properly wed as equals. And unlike most myths and tales of ancient love, Psyche and Cupid are properly wed and… live happily ever after.

Psyche (the soul) and Cupid (love) would go on to conceive a daughter, Voluptas (pleasure).

The two would spend the rest of their days in happily wedded bliss—gifting the world a union that would forever change the course of mankind.

And that, my love, is the story of Psyche and Cupid.